This is my last Facebook post. I barely go on here as it is, but I’ve kept it around because —well, it’s Facebook: it’s like a public utility, everyone has it. However, I can no longer be part of a platform that sells my personal data to the highest bidder, regardless of their intentions. Anytime a product is free it means you’re the product, selling your data —your digital life— to who knows what companies and organizations. And I can no longer be a part of a platform that doesn’t acknowledge my personal values.

This place is rampant with misinformation and it’s leading to a population that’s becoming more and more misinformed. People who don’t have the capacity to fact check will see something on Facebook and accept it as the truth. Information is the foundation for a healthy and functional society, especially a democracy. If you don’t have reliable and credible information, you can’t make decisions that are in your own best interest.

Facebook has done nothing to deal with this problem that’s rotting our society. What may seem to be inaction is actually a calculated decision. They want controversy and conflict. Their research shows that it increases engagement —clicks, likes, shares, and comments— which means you’re more likely to spend more time on the platform. And the more time you spend, the more money they make. The platform, by design, is riddled with echo chambers. Regardless of your political affiliation, you’re more likely to only get information that reinforces your own worldview, whether it’s based in reality or not. This prevents people from having access to new ideas and different points of views.

And with everything going on in this country right now, whether it be the pandemic or racial injustice, misinformation is more dangerous than ever.

With civil unrest raging across the country, people in power are inciting division and threatening violence rather than listening to legitimate grievances and encouraging unity.

Civil Right leaders met with Mark Zuckerberg yesterday hoping to have some of the inflammatory posts removed or flagged since they were inciting violence against demonstrators. He refused to take any action, and worse, he didn’t even give credence to their complaints.

The civil rights leaders he spoke with were dismayed, saying “We are disappointed and stunned by Mark’s incomprehensible explanations for allowing the Trump posts to remain up. He did not demonstrate understanding of historic or modern-day voter suppression and he refuses to acknowledge how Facebook is facilitating Trump’s call for violence against protesters. Mark is setting a very dangerous precedent for other voices who would say similar harmful things on Facebook.”

Twitter has at least acknowledged the problem and they’ve put measures in place to fact check misinformation coming from the top. Their opponents call it “censorship,” which is misinformation in and of itself: Twitter isn’t censoring anyone, they’re simply adding a link for users to get the facts on tweets that are misleading or blatant lies. Even when he sent out a Tweet threatening violence against demonstrators, they simply placed a warning label, stating that the content violates their policy against glorifying violence. They still allowed users to view the tweet with a simple click. Yet, Facebook has done nothing. They value their shareholders more than helping their users sort fact from fiction.

With Facebook being a morally bankrupt organization, I can no longer be associated with this platform. If you want to maintain a connection with me, you probably have my phone number. If not, you can email me at laststandfortruth@gmail.com.

I bare no judgement on anyone who wants to be a Facebook user. This was something I’ve been intending to do after Facebook got caught selling our data to the highest bidder without any ethical checks on what they were using that data for. However, this past week has been the straw that broke the camel’s back.

So, I’ll be deleting my Facebook account and won’t regret doing so. This isn’t about politics: we’re all affected by these practices in one way or another. It’s about a grossly irresponsible corporation that’s helping to destroy this country from the inside out.

“Knowledge will forever govern ignorance, and a people who mean to be their own governors, must arm themselves with the power knowledge gives. A popular government without popular information or the means of acquiring it, is but a prologue to a farce or a tragedy or perhaps both.”

In fact, much has changed from the time the party was established to the Republican Party we know today. There are some people in our country who push the false narrative that the Republican Party is still “the party of Lincoln.” This false narrative also serves to stain the modern Democratic Party with our greatest national sin and our greatest internal conflict: slavery and the Civil War, respectively.

ORIGINS OF THE REPUBLICAN PARTY

Since abolitionists didn’t yet have the power to take on the slave states, they tried to ensure that the U.S. territories would remain free. However, with the passing of the Kansas-Nebraska Act in 1854, slavery was now an option for the territories. This was the event that led to the founding of the Republican Party.

Before he even took the oath of office, slave states were already seceding from the United States. They feared Lincoln would not only prevent the expansion of slavery into other territories, but that he would seek to abolish it all together. Once the slave states started seceding, they had crossed the proverbial Rubicon. Lincoln had to fight to keep the Union intact, which led to the deadliest war in American history.

This sounds strange to us today because it’s exactly the opposite of the modern Republican Party’s and Democratic Party’s respective ideologies. How did this happen? Well, as with any study of history, it’s complicated.

The ideological swap didn’t happen in one fell swoop. The swap wasn’t nefarious or conspiratorial, but simply a reflection of changing attitudes over long periods of time. It was a slow, incremental process swayed by the winds of history.

There’s a significant amount of misinformation and disinformation on this historical topic, which has been confusing the public’s understanding of the history of America’s two preeminent political parties.

The topic has been misunderstood for some time, but with the ascension of President Donald J. Trump, millions of Americans are operating under a different set of facts –“alternative facts,” as one Trump advisor put it. And it’s become a ripe source for propaganda peddlers who argue the Republican Party is still “the party of Lincoln,” the Great Emancipator and Savior of the Union. And using this faulty logic implies the Democratic Party is forever branded as the party of slavery. These are troubling times we live in when propagators of disinformation seek to distort history for their own personal or political gain.

So, the Republican Party being regarded as “the party of Lincoln,” while technically true since he was a republican, is nonetheless a misleading and manipulative statement. Lincoln’s ties to the modern Republican Party exists only in name and not by any meaningful ideological or rhetorical virtues. 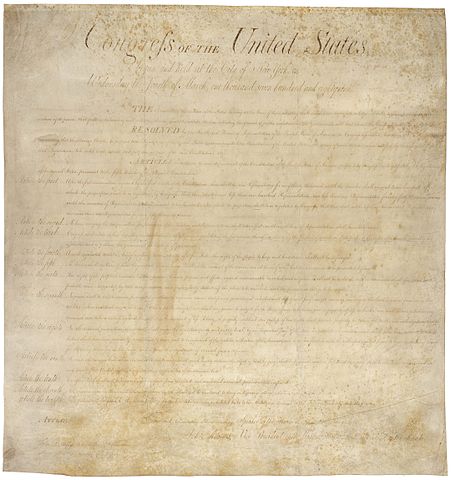 The First Amendment to the United States Constitution gives American citizens a variety of protections, focusing on the freedom of speech and expression.

Congress shall make no law respecting an establishment of religion, or prohibiting the free exercise thereof; or abridging the freedom of speech, or of the press; or the right of the people peaceably to assemble, and to petition the government for a redress of grievances.

James Madison, revered as “the father of the constitution,” was initially in the no-amendments-necessary camp. His mind was changed by his mentor, Thomas Jefferson. Jefferson was famously wary of a powerful, centralized federal government. Amending the constitution with a Bill of Rights would ensure the civil liberties of citizens were protected at the federal level. So, in 1789, when the constitution was submitted to the states for ratification, it included the Bill of Rights.

FREEDOM OF THE PRESS

‪The very fact the founders decided to grant protection to the free press is indicative of the value and importance they attributed to it.‬ The constitution was created as a blueprint for how to best deploy a representative democracy. It was critical that the constitution would not only provide a framework for governance, but also to embed protections to ensure its survival. The freedom of the press is the most important protection since without it, citizens wouldn’t be informed that their other liberties were in danger.

IMPORTANCE OF THE PRESS

The power of the government comes from its citizens: government by the people, for the people, and of the people. It’s the people who elect their representatives, senators, and president. And it’s therefore imperative that the people are well informed to make the decisions that affect not only their lives, but also the lives of their fellow Americans. It’s the press who’s tasked with gathering, vetting, and delivering information to the people.

We have the three co-equal branches of government and each is responsible for checking and balancing the others. The executive, legislative, and judicial branches are the pillars that hold our democracy in place. The press –that is, the summation professional journalists– serves as the fourth pillar of our democracy. The press is sometimes referred to as the fourth estate for this very reason. It’s not an official branch of government; it’s an independent institution. Calling it the “fourth branch” would be unfitting, but calling it the “fourth estate” is a way of equally conveying both its importance and independence to our democracy.

It’s our civic duty to stay informed by using reliable press sources. If we’re not getting reliable information we cannot make reliable decisions. And it’s our decisions that shape the future of our democracy.

Quotes on a Free Press

“Our liberty depends on the freedom of the press, and that cannot be limited without being lost.”

“Knowledge will forever govern ignorance; and a people who mean to be their own governors must arm themselves with the power which knowledge gives.”

“Freedom of conscience, of education, of speech, of assembly are among the very fundamentals of democracy and all of them would be nullified should freedom of the press ever be successfully challenged.”